After drawing in this Bouguereau I painted the grisaille. I’m not normally used to modelling the forms so thoroughly but I found that to be a very valuable experience, because I don’t think I have ever done it! I have found in the past that as long as the drawing is correct in the grisaille then the glazes and half-pastes (with white) will continue to refine the modelling.

I was also conscious of not painting the grisaille too dark to begin with as the later glazes will darken it further. Also it is difficult to tell wether it is purely a glaze that creates the shadow tone here or if there are thinner glazes over the grisaille. I can’t actually tell if the shadow area on her neck below her chin is a thicker rich glaze or the result of the shadow painted in grisaille, showing through the glaze. It doesn’t actually look like there is any grisaille showing through. I recognise the glaze as a mixture of green and red (which ones I’m not so sure). My hunch though is that it is created from Sap Green and Cadmium Red or Vermillion. I left it as a compromise with a little shading in the underpainting. The sharper transitions can all be softened with glazes and I will show this in my next video.

The whole point of the grisaille is that you don’t lose touch with the drawing and it is visible through the glazes. Its a chicken and egg scenario trying to work out which came first. Only time will tell, and when I do the glazing I should have a much clearer idea of how Bouguereau did it. 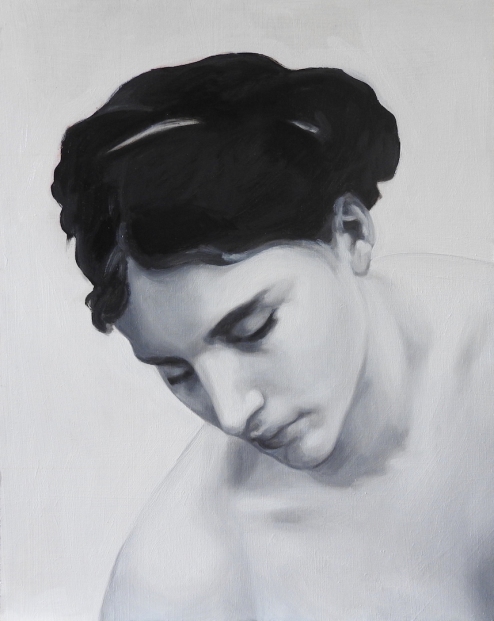 In the grisaille I have deliberately left some of the transitions between light and shade a little sharp, and some of the lighter areas quite flat. This I hoped would enable me to concentrate on modelling the forms with the colour glazes which is what I think Bouguereau did.

All the modelling around her shoulders could have been created with glazes only over a fairly flat underpainting. Also I have not really darkened the area on her left cheek as I’m sure this has been created with a red glaze. I once saw a photo of one of his paintings where the glaze was flaking off but unfortunately I can’t find it again. This proved though that so much of the modelling was done with glazes alone, and that these glazes gave the work that translucent quality. 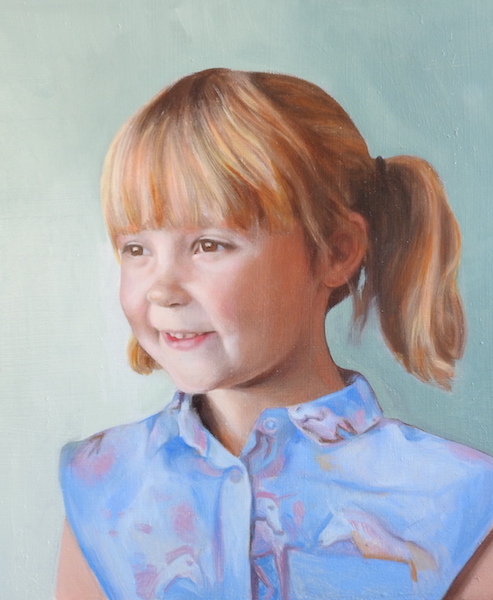 These images (the 1st 2 are film stills) show the first 3 glazes as they went on, alongside the initial underpainting. This portrait was a challenge in the sense that I underestimated how light the reference was and how light the final painting would be,  so the grisaille was too dark to begin with and the glazes darkened it further. It is still a challenge to find this balance in the grisaille and resist the temptation to paint it too darkly.

When the values are a bit dark in the grisaille it can take a while to lighten them, although this can be a blessing because repeated glazing has an unrivalled quality compared to only a few glazes.

Philip Guston described himself as a moral painter, and said the effort a painter puts into their art is still there in the final painting. Sometimes where the path of least resistance has been taken, paintings can have a shallow quality sometimes. But all the effort and struggle, corrections, reworking, repeated revising etc. carry a moral charge that one can intuitively feel and perceive in the final painting.

The video I made of the first glaze going on the underpainting is here on my videos page.

In the end I felt that it worked better to declutter the background, but I kept the colour suggestion of the chair, a warm light green.

Here is a new video of me working on a first colour glaze in oils, over an acrylic grisaille underpainting, which is a new medium for me. I’m trying to speed up the process a little bit. It took a while to get the hang of acrylic, something I’m still progressing with. The grisaille is done using raw umber and titanium white, but hopefully the video is self-explanatory.

This is the first stage, the grisaille. I will be posting a video of the first glaze in a few days. The sitter is the sister of the earlier portrait posted. I will be able to continue modelling the forms as I glaze. I have talked about this elsewhere but the drawing never stops while glazing is taking place, each glaze revealing new areas to develop in the painting. The grisaille is not perfectly formed but is enough to form an anchor for the rest of the painting. Hue or colour is in itself drawing and form and all the imperfections and flat areas are transformed with the glazes.

There are many different ways to make a grisaille underpainting; with black and white as here, or you can make a ‘verdaccio’ which is monotone green and white, or burnt umber and whites. In the future I would like to do some paintings with very limited palettes, like the Zorn palette which has Yellow Ochre, Black, red and white. Or like the one I used at school, Burnt Sienna, Cobalt Blue and White. Just thinking about it is so nostalgic and I fondly remember swimming in warm and cool tones back then. 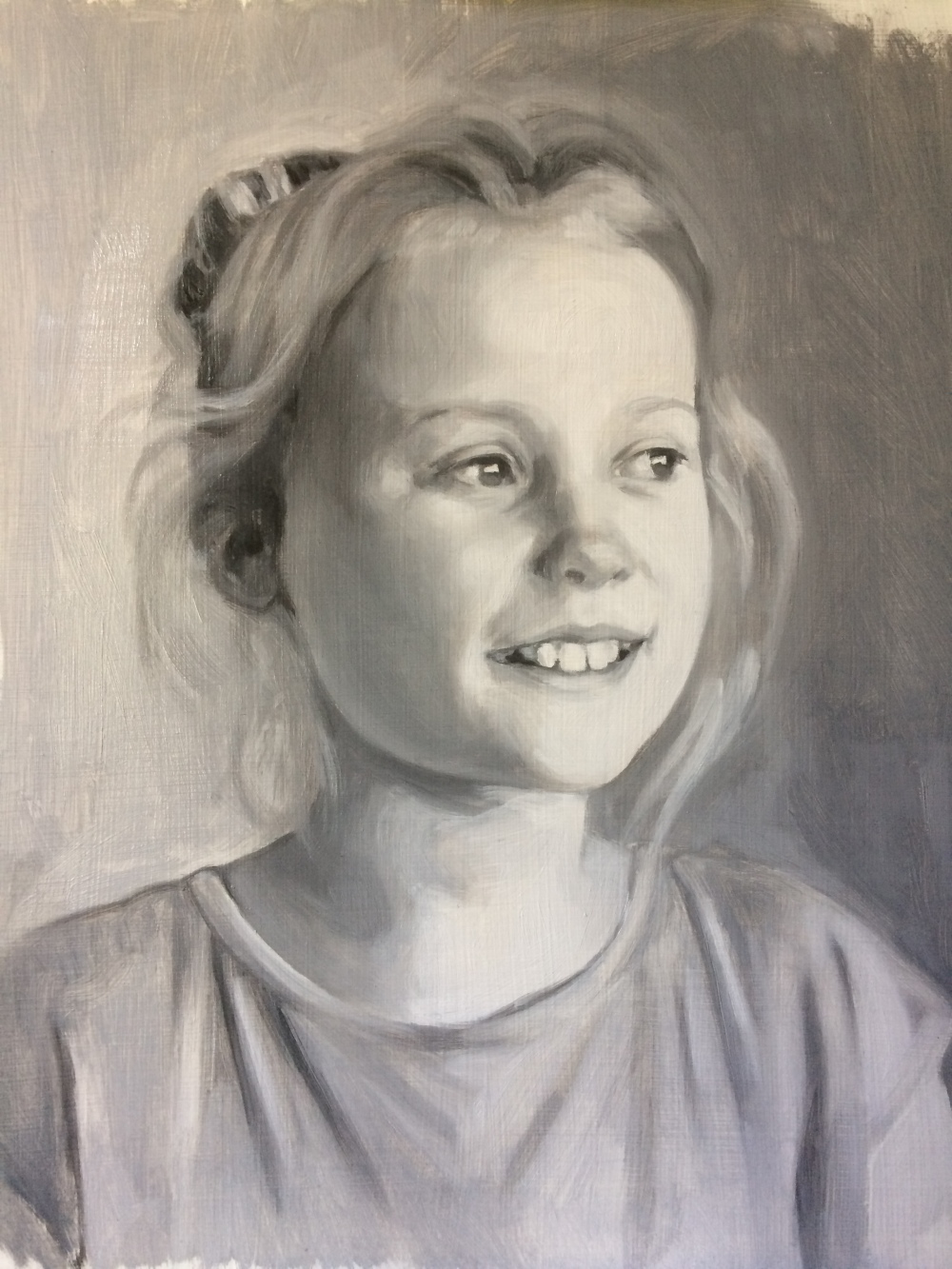 New video on youtube of the grisaille and glazing process

I wanted to share the magical transformation an oil painting undergoes, glazing oil colour over a monotone underpainting.

I filmed myself painting the glaze and velatura over this portrait for one hour, in 3 short videos – this being the first. Its the first glaze and there will be a few others to finish the portrait, but this video shows the process, and I hope shows why I find it such a rewarding method to work with. It shows the dramatic results you can achieve in a relatively short amount of time.

This is Amy’s portrait, glazed in oil paints. I filmed myself doing this and it will shortly be on my youtube channel. Its still in the early stages, and when this layer is dry I’ll go over it again, up to 3 or 4 times. I don’t know if I’m going to film those other stages – they might be a bit boring as its just a lot of tinkering. In the early stages its quite dramatic how a few glazes of colour changes the grisaille into a very nearly finished portrait. Stay tuned!

Before and after glazing over grisaille. The first oil glaze took roughly an hour to complete. The grisaille underpainting was painted using Titanium White and Ivory Black oil paints, and the glazes are mixed from Alizarin Crimson, Raw Sienna, Cadmium Red, Titanium White, Ultramarine Blue and Sap Green, to name a few