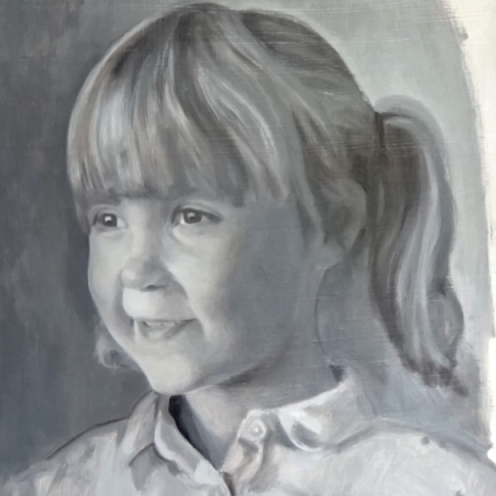 These images (the 1st 2 are film stills) show the first 3 glazes as they went on, alongside the initial underpainting. This portrait was a challenge in the sense that I underestimated how light the reference was and how light the final painting would be,  so the grisaille was too dark to begin with and the glazes darkened it further. It is still a challenge to find this balance in the grisaille and resist the temptation to paint it too darkly.

When the values are a bit dark in the grisaille it can take a while to lighten them, although this can be a blessing because repeated glazing has an unrivalled quality compared to only a few glazes.

Philip Guston described himself as a moral painter, and said the effort a painter puts into their art is still there in the final painting. Sometimes where the path of least resistance has been taken, paintings can have a shallow quality sometimes. But all the effort and struggle, corrections, reworking, repeated revising etc. carry a moral charge that one can intuitively feel and perceive in the final painting.

The video I made of the first glaze going on the underpainting is here on my videos page.

In the end I felt that it worked better to declutter the background, but I kept the colour suggestion of the chair, a warm light green.

Here are a selection of photos showing the completed glazes done over the grisaille underpainting in this portrait commission.

The first layer, called a grisaille as its painted in grey, using Titanium White and Ivory Black

The first glaze which was painted in roughly an hour. This is the subject of a film in 4 parts, showing the 1st glaze being painted in oils 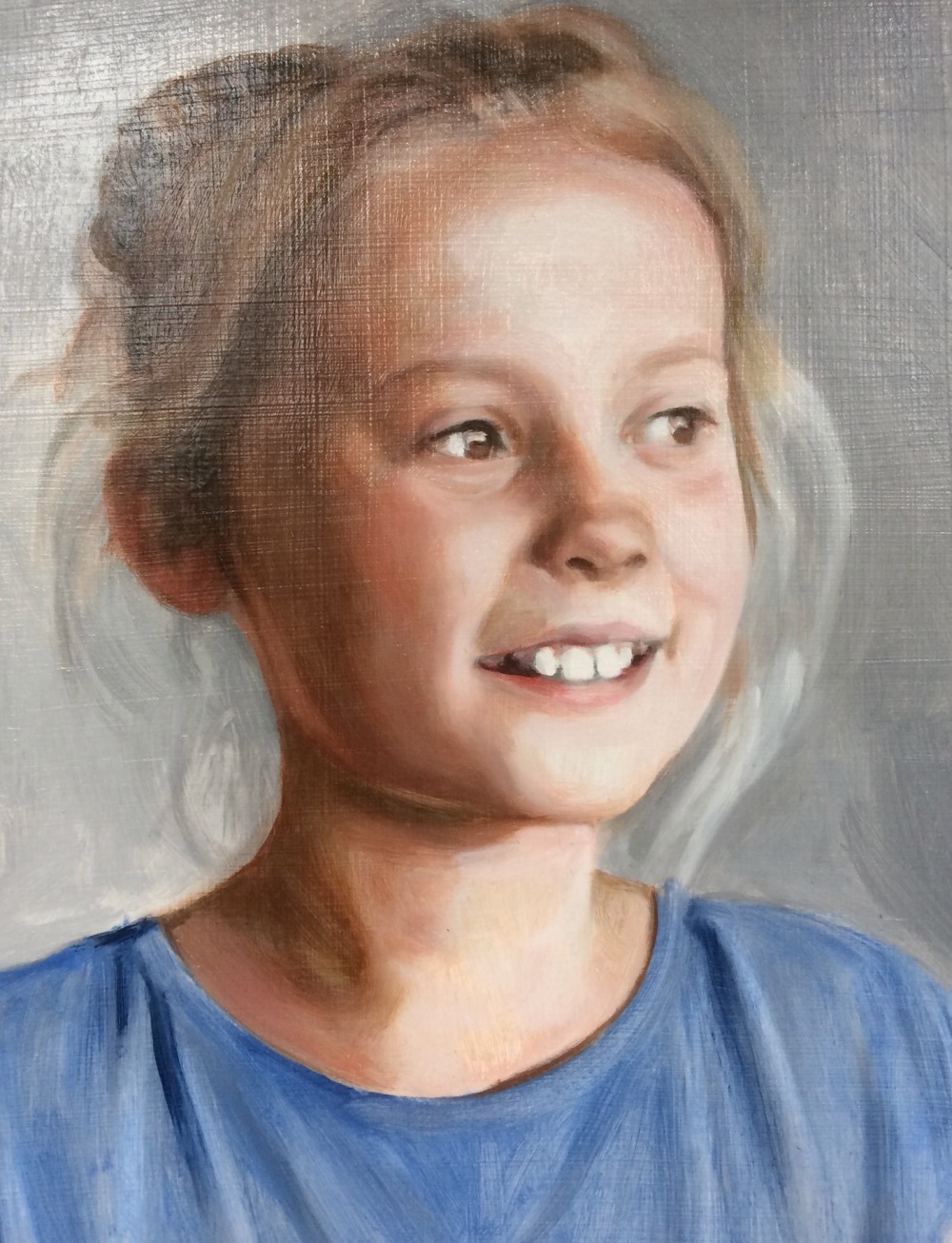 The second glaze, painted after a couple of days when the first glaze had fully dried. I use M. Graham’s Walnut Alkyd medium. The alkyd accelerates the drying, otherwise the oil takes at least a week to be dry enough to paint the next glaze. 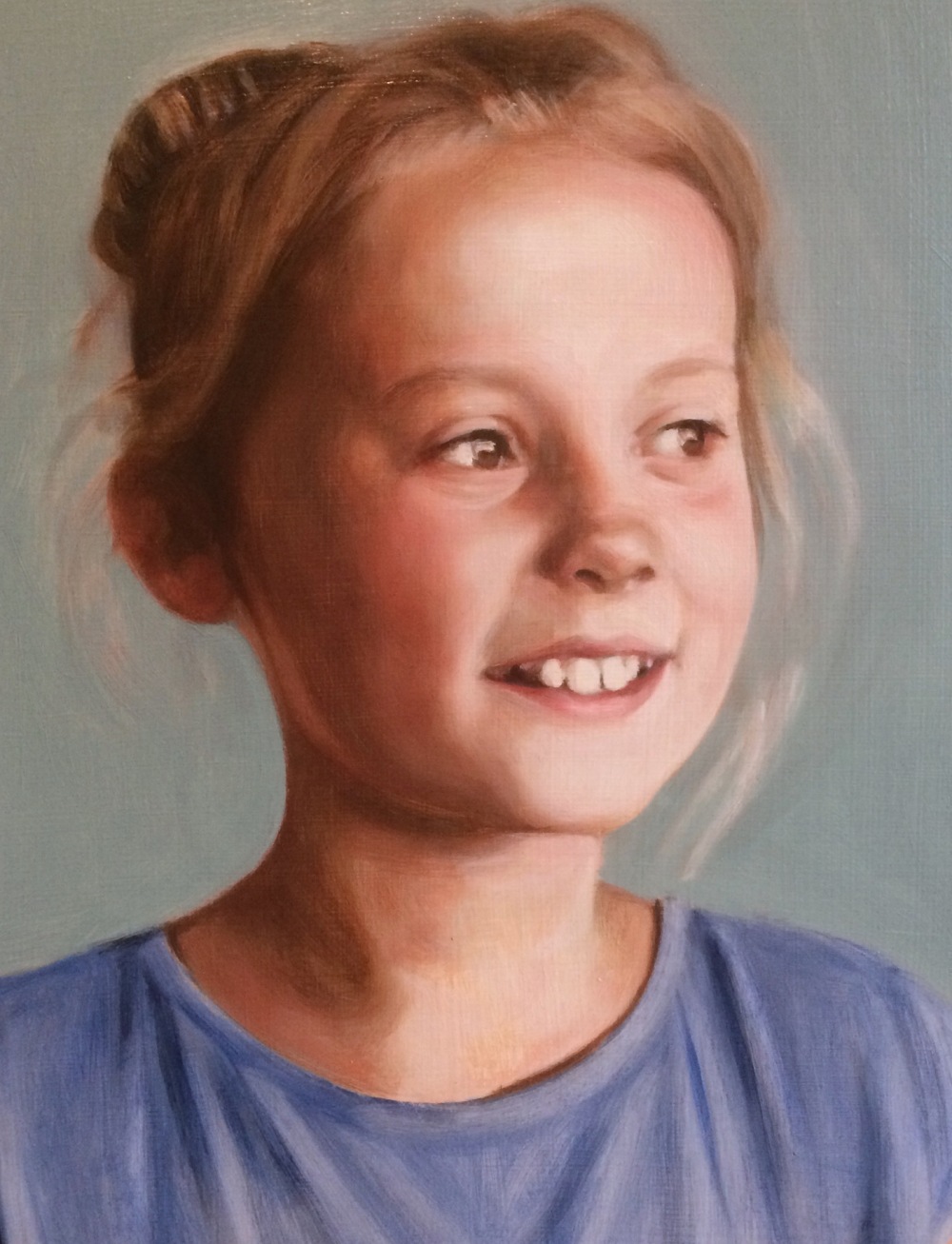 The third oil glaze shows the colours getting richer. I continue to model the forms of the portrait while I paint the glazes. 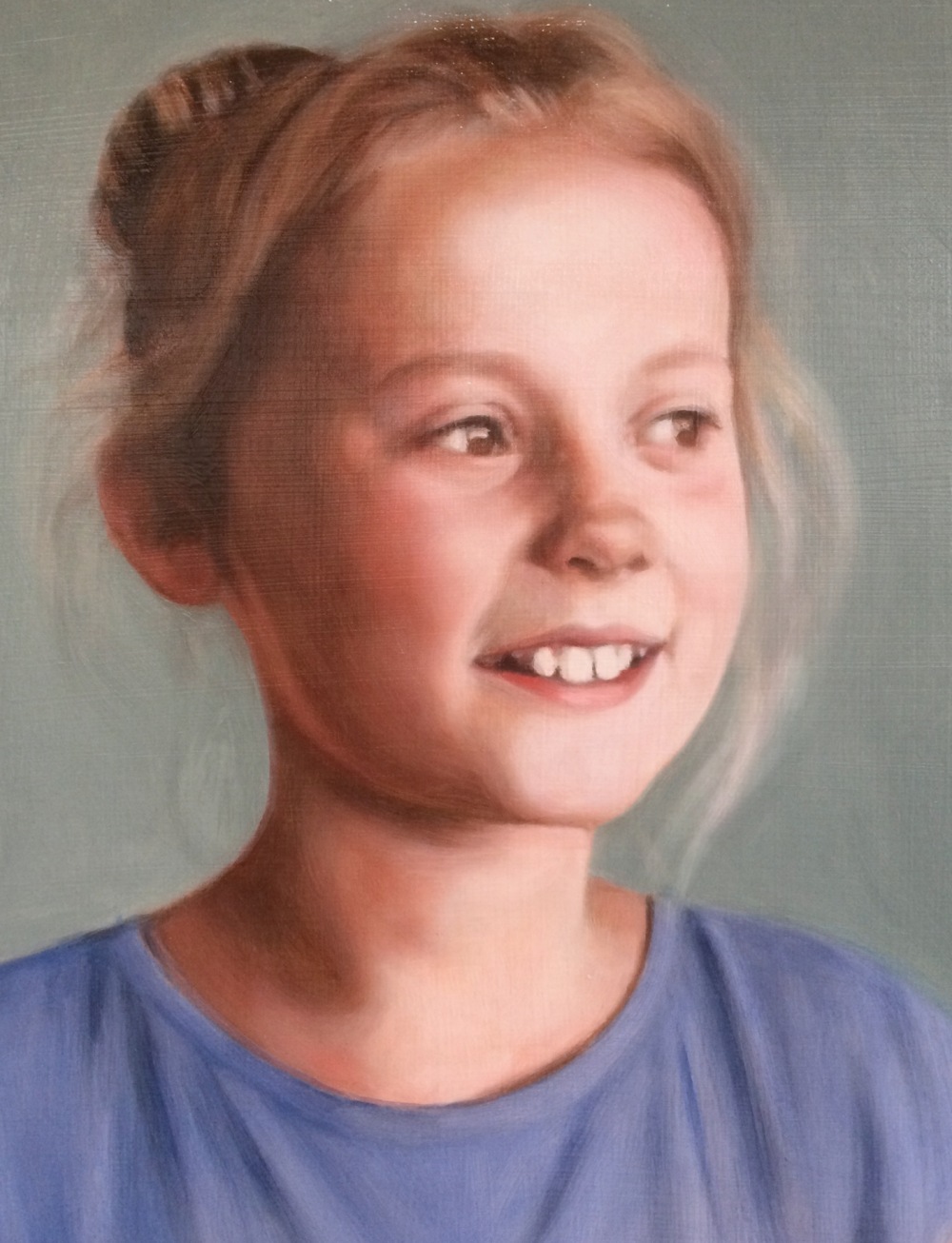 I was recently commissioned to do a drawing of two twins. See if you can spot the difference. 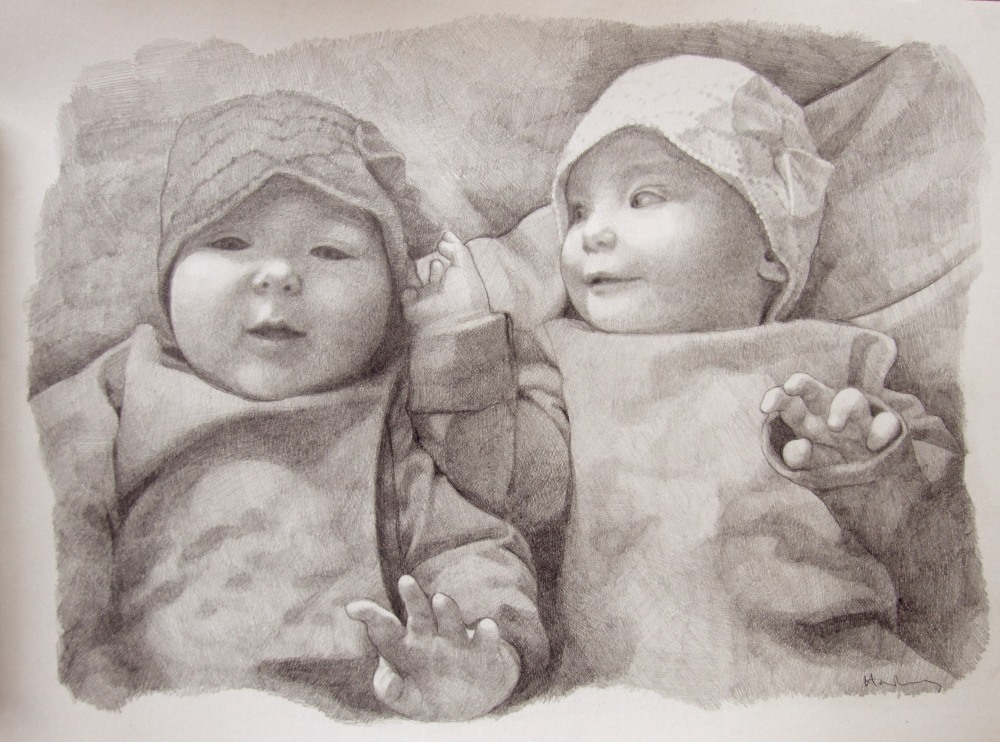 The drawing after adjustments

I worked very closely from the photo provided but the client didn’t like the way the tongue looked in the end, so I had to do a bit of human photoshopping. In hindsight it was never going to work, but I followed the brief and was still happy with the drawing at that stage. Its the first pencil drawing I’ve done for over 20 years and, ahem, nearly 30.. Still working with a  crosshatch style. Old habits really do die hard with art. As I wrote in another blog, Learning to love black, it took me years to shake off the idea that black in a tube was a crime against art.

This is Amy’s portrait, glazed in oil paints. I filmed myself doing this and it will shortly be on my youtube channel. Its still in the early stages, and when this layer is dry I’ll go over it again, up to 3 or 4 times. I don’t know if I’m going to film those other stages – they might be a bit boring as its just a lot of tinkering. In the early stages its quite dramatic how a few glazes of colour changes the grisaille into a very nearly finished portrait. Stay tuned! 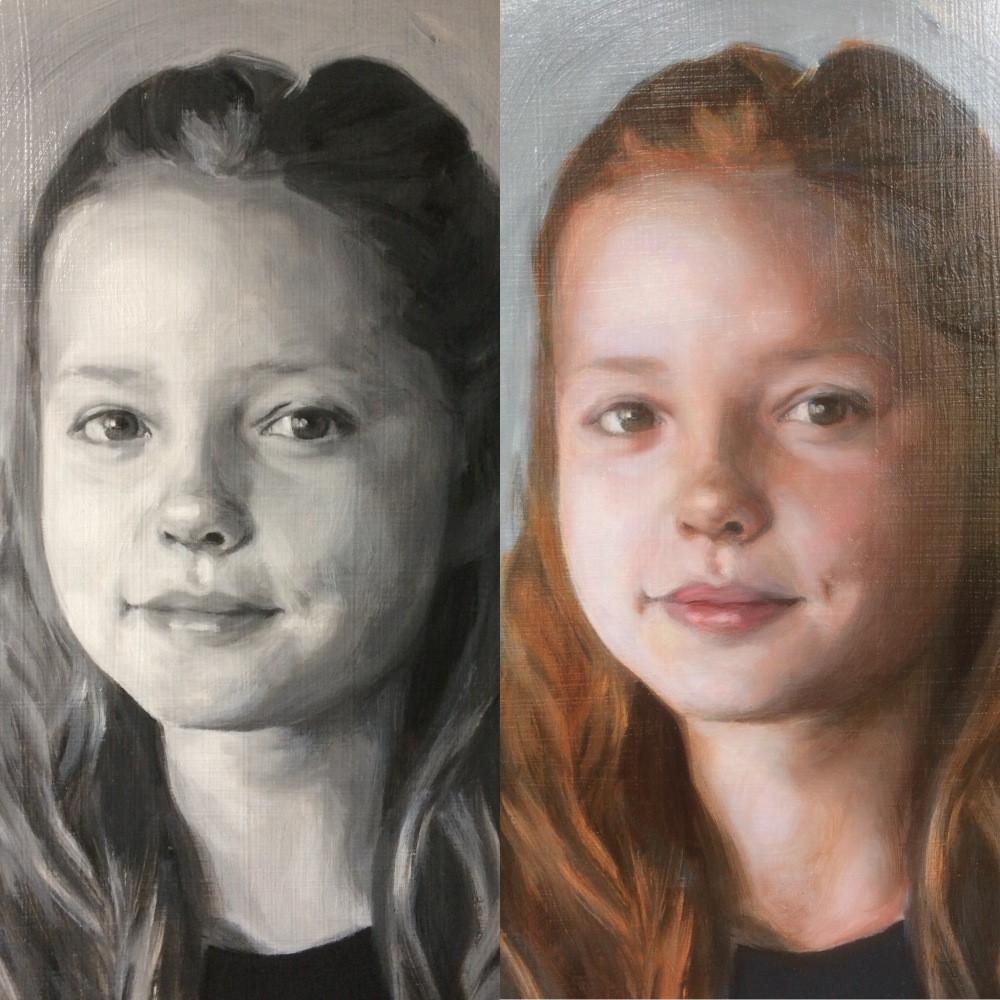 Before and after glazing over grisaille. The first oil glaze took roughly an hour to complete. The grisaille underpainting was painted using Titanium White and Ivory Black oil paints, and the glazes are mixed from Alizarin Crimson, Raw Sienna, Cadmium Red, Titanium White, Ultramarine Blue and Sap Green, to name a few